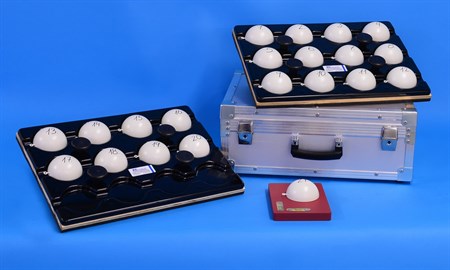 Application:
The hemisphere method describes near-bottom flow conditions in watercourse. The method is based on a simple concept:
The weight of a hemisphere exposed to a flow is moved by a given current from a reform plate. The set of hemispheres consists of 21 identical hemispheres with different specific gravity.

The modern description of the quality of running waters requires a solid understanding of physical conditions.

Modern conservation of running water and restoration of nature aims at natural variation of the physical environment of running water, considering channel form, as well as discharge and bottom space sediment.

This complicates the use of traditional methods of measuring flow for example propeller instruments, well-known to be unreliable for measuring current in weeded running water or near the bottom of the stream.

The hemispere method is an attractive alternative/supplement for a detailed evaluation of the physical environment when restoring running water, establishing spawnbanks, etc.

The method is especially suitable if the flow forces prevailing at the stream - bottom are of interest.

From Statzner, B and R. Müller. 1989. Standard hemispheres as indicators of flow characteristics in lotic benthos research. Freshwater Biology 21: 445-459.

Calibration of FST-hemispheres against bottom shear stress in a laboratory flume.
Freshwater Biology (1991) 26, 227 - 231